How is Wilson disease inherited?

Wilson disease is an autosomal recessive disease, which means in order to inherit Wilson disease, both parents must carry at least one genetic WD causing mutation (abnormal alteration in the gene) that each parent passes to the affected child.  Each child of parents who are both carriers has the same 25% chance of inheriting two WD causing mutations.   At least one in 30,000 people of all known races and nationalities has the disease.

Of the 23 different human chromosomes, the gene responsible for Wilson disease is located on chromosome 13.  The gene is called ATP7B and it contains the genetic information necessary to make a copper transport protein that plays a key role in incorporating copper into ceruloplasmin and moving excess copper out of the liver.  Mutations in the gene lead to an abnormal copper transporter that cannot move copper effectively or at all.  This excess copper accumulates in the liver and other organs.

The diagram below shows the basic risk profile for family members.  A genetic counselor can provide a more detailed pedigree of specific family relationships. 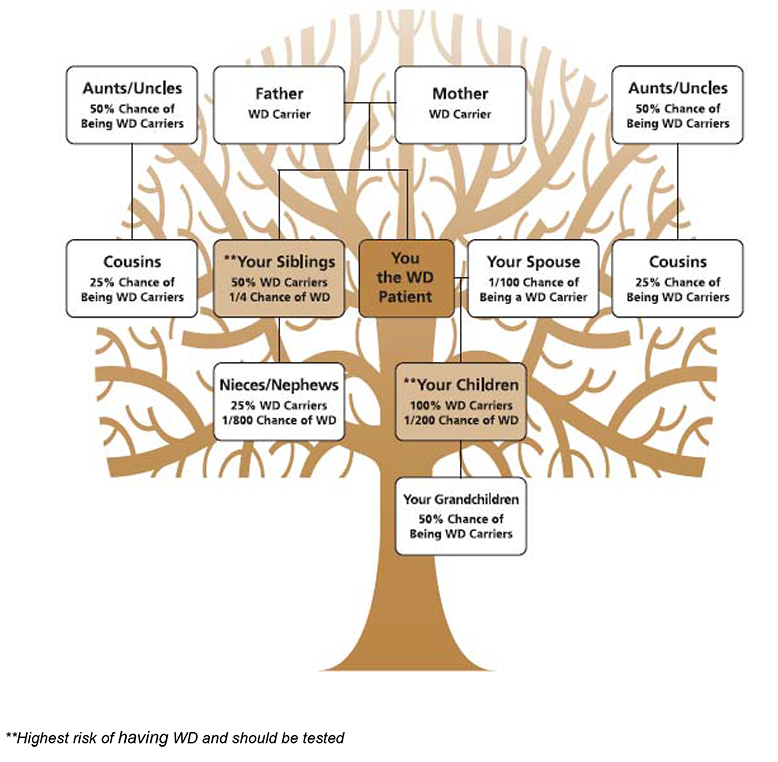 Your support allows the WDA to maintain this website, produce educational materials, support research, and hold meetings for people living with WD, their families, and the healthcare community.

As a member, you have the opportunity to communicate your concerns, share your experiences, learn about the most recent advances in Wilson disease treatment and research, and contribute to important decisions that need to be made so the WDA can be a strong patient advocacy group